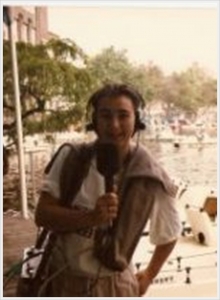 Following an intense and exciting career as a television journalist in both the Netherlands and the UK, I followed my heart and retrained as a professional counsellor. What followed was a rewarding personal and professional path.

I hold a counselling diploma from the Central School of Counselling and Therapy (BACP accred) and a Masters in Psychosynthesis Psychotherapy from the University of East London (UKCP accred).

I am registered with the Dutch Federation for Healthcare (NFG) and licensed to work within the mental healthcare and insurance network as a Psychosocial Therapist. I adhere to the NFG code of practise, am insured, follow supervision on a regular basis and meet their continued professional development criteria.

I lived in the UK as a little girl, going to primary school there, before moving to Holland. I returned to the UK a fully-fledged young journalist, full of ambition to change the world. I found work as a news reporter for satellite channels such as Europa tv, Superchannel and TV3. Highlights were an interview with an Irish pig farmer, knee-deep in muck and hearing the deeply moving stories of the homeless in the soup kitchen at St. Martins.

However, my career as a journalist experienced its own version of being stuck in the mud. I didn’t feel at home in the world of television news and often felt the interviewees were compromised in favour of their story. I had also married a colleague from Sweden by then and decided motherhood would suit me better.

Many miscarriages later (and ultimately a wonderful son!), came the seminal moment in my personal journey where I realised, I had to ask for help. And it was so hard. I remember cycling to the local miscarriage support group in Uxbridge on my big Dutch bicycle feeling like the biggest loser.

It was there I learned my first big life lesson: it is braver to ask for help than to pretend to be coping and put on a false smile. Vulnerability is strength and stops you from running away from yourself.

I started a slow career switch by ‘testing the water’ as a volunteer for the Samaritans, the Miscarriage Support organisation and the Ectopic Pregnancy Trust. Soon I realised that this was the work that made my heart sing. I enrolled with the CSCT on a three-year, accredited counselling training.

In 1997 the family moved to Sweden and building a practise in a foreign country took some patience. I started writing about our experiences of pregnancy loss and took long healing walks in the Swedish woods where I heard the songs that were later to become the Aviva song cycle. In 2000 Small Sparks of Life, was published.

The second big turnaround in my life came as I followed a childhood fascination with the spiritual aspects of our being. The miscarriages had made me very cross with the Dutch reformed God I had grown up with and the question ‘why me?’ loomed large. The song cycle Aviva explores this journey from ‘why me, to why not me?’

And so I took another step on my life journey and enrolled at the Psychosynthesis Academy in Stockholm to further my understanding of existential and transpersonal models of psychology and how they can be used in therapy.

In 2004 I was proud to receive the Margot Russel Stipend for Aviva. It was performed to great acclaim by an enthusiastic troupe of amateurs at the 2008 European Psychosynthesis summer school in Sweden.

In the meantime, I had founded the Turning Point Counselling center in Stockholm, which successfully grew into the main center for international and expat counselling in Stockholm, as well as serving the local Swedish community. I worked with an inspiring crew of international therapists, from different countries and with varied therapeutic backgrounds. It was, and still is, a truly integrative, international melting pot.

As our reputation spread, I was asked to speak at international schools and organisations in Stockholm about the specific issues that affect expats, issues that we knew well from our client work, but also from our own experience as globally mobile psychologists and counsellors. I was invited to become the national health editor for Your Living City where I wrote a series of articles on expat issues, and answered readers’ questions. The joy of writing that originally brought me to a career in journalism, now danced with my growing understanding of the ‘human condition’. From time to time, I still post my personal reflections from these frontiers of ‘being human’ on my Healthy Neurotics blog.

Returning to my watery roots

I had settled into a nice routine but life had other plans for me. By 2015 I found myself divorced, back in Holland on a wonderful old houseboat that caught fire and almost sank the first year I was there. Again, life called me to a thorough inner and outer overhaul.

The houseboat was totally remodelled adding a unique self-contained studio to serve as a counselling retreat. For three years I focussed on these inner and outer changes while translating a book on the 64 archetypes of human development.

In 2020 I became a registered member of the Dutch NFG organisation, allowing me to work with the Dutch healthcare and insurance system.

So now that you’ve heard my life story, maybe you’ll want to share yours with me.

One thing I now know for sure: Life is a mystery and she is not there to punish us or make our lives hard. My final lesson, for now, is that we can’t change what happens to us, but we can change how we respond!